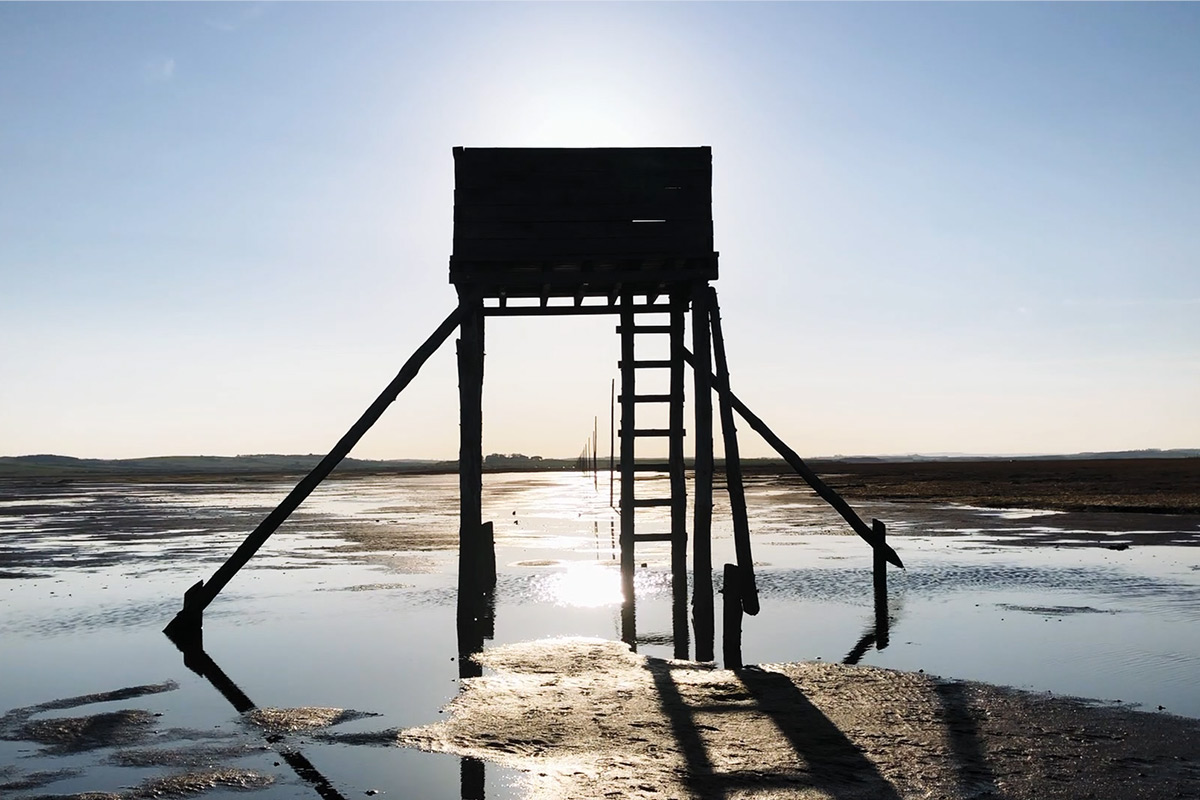 between two shores, a screengrab from a project trailer video, 2021.

Between two shores examines the interrelated issues of climate change and especially climate induced migration, its human rights implications and the climate injustice at its roots.

The project is grounded in the environs of Lindisfarne and the Lindisfarne National Nature Reserve - an environment accessed by an intertidal causeway which is threatened by sea level rise and which is marked by refuge towers for those caught out by the rising waters.

The project is structured around two main elements: Firstly, a participatory event taking place in the unique landscape of the Pilgrim’s Way – a walk by people with experience of displacement across the tidal causeway to meet the island residents.

The second part is the development of a Climigration Testimonies Archive. This will consist of short testimonies from people who have had to leave their homes as a result of climate change and Lindisfarne residents’ reflections on the changes that have taken place to the tidal landscape over their lifetimes.

By linking the local environment with the physical impact of climate change and the related issue of population displacement the project draws attention to the difficult social effects climate change brings with it. It aims to raise the voice of those affected and calls for action in the face of our shared social responsibilities in relation to the global climate emergency.

The project was launched as a part of Refugee Week 2021: We Cannot Walk Alone.

On Saturday 11th September we walked the tidal pilgrim’s causeway to Lindisfarne to draw attention to climate injustice and to express our solidarity with all those seeking refuge - Holy Island is a place of sanctuary after all. Together the project participants (refugees, asylum seekers, immigrants and the reserve scientists) walked across the causeway to meet island residents, share food, reflect on the idea of sanctuary, hospitality and welcome.

Project is funded by Arts Council England and Kone Foundation and is being supported by The Finnish Institute in UK & Ireland, Gem Arts, Northumberland Coast Area for Natural Beauty (AONB) Partnership and produced in collaboration with The Natural England.

A link to between two shores at Refugee Week website.

A link to between two shores - project intro trailer (YouTube).

Ten thousand webbed feet mark the sand. In a few hours the marks will vanish; but there is comfort in knowing they will all be re-made tomorrow. This anyway is the predictability that has prevailed up to now, for the seasonally visiting Brent geese and the daily inrushing tides at Holy Island, Northumberland.

There are questions in the air about the future of these rhythms. Literally in the air, where the atmosphere lurches into unknown realms of warming and storming, and in the oceans, as they rise and acidify. Lindisfarne boasts every local and national policy protection available, but its fate links to these wider factors. No island can be insular in this context. 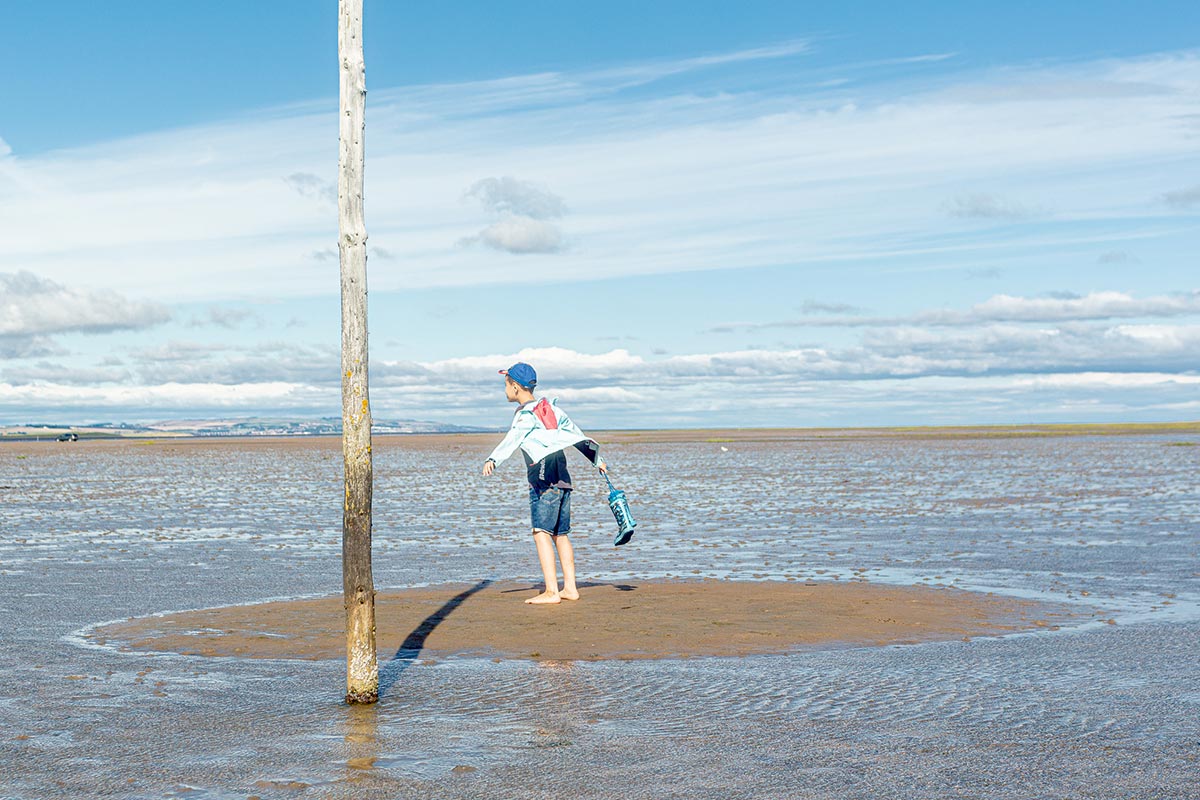 Climate change is about more than temperature or sea levels. The real threat is collapsing systems of connection, such as peak food availability synchronising with the temporary presence of a migratory bird population at each staging-post along its intercontinental flyway. Complex ecologies hang on fine threads of such relatedness, at all levels – predator-prey dynamics, pollination, productivity, pathogens, the hydrological cycle.

And so it is with the impacts on people - not just individual flood, fire or drought events, but systemic disruption of long-term water and crop security, jeopardising the ability of a given area to support its human population; leading to conflict over resources, forced displacement and worse. Impacts such as these fall unequally around the world, and are exacerbating existing inequities.

Human feet, this time. Thirty pairs of them, in a group walk across the sands, organised by artist Henna Asikainen as part of her project Between Two Shores. The group includes families and individuals who have arrived in the north-east as displaced refuge-seekers from troubled elsewheres, along with some of those who have helped. The walk is an act of creative cultural engagement, to draw attention, explore meaning, express solidarity, deepen relationship, and pose questions about the society and the environment within which we grapple for new narratives and notions of justice to fit the times.

The location is apt. Lindisfarne is an island twice a day, but when the tide drops, the sands can be crossed on foot or by vehicle on a causeway. The “two shores” (island and mainland) repeatedly embrace and shun each other; serving as a metaphor for the attitudes explored in Asikainen’s project. This regime may alter under climate change scenarios: perhaps with reduced low-water access times, perhaps more frequent storm damage to the crossing route, perhaps major shifts in the distribution of sandbanks, or altered biota in a warmer sea.

From medieval times the island has been a place of pilgrimage and refuge, the walk across now being ritualised by many to enliven this legacy. For the “two shores” group, therefore, the walk was charged with symbolic resonance, following where thousands had gone before, questing towards whatever (then and now) may have been devoutly wished – spiritual affirmation; sanctuary; a valued life.

Similar-looking walks elsewhere might occur as re-enactments of “forced march” events, prompting questions about where exactly the shift happens from lived trauma to commemorated heritage. In either case, ritual repetition helps to lay down the enduring significance. 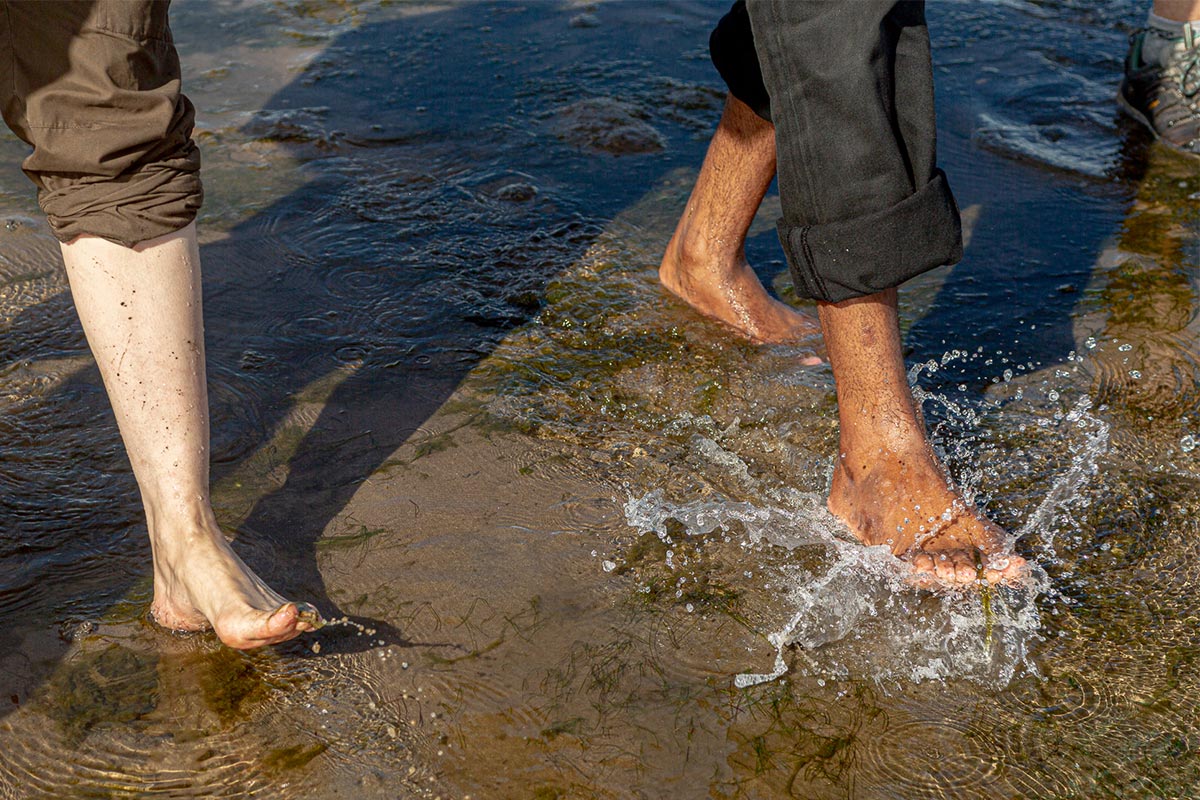 The feet splish on; some rubber-booted, more of them eventually opting for the bare-soled groundedness of toes-in-the-sand contact with the world, water round the ankles. Trusting feet, empathetic feet, light treading, skirting around, digging in, gravity-loving, honest feet. Since the first upright bipedal Homo erectus became our ancestor, it is our feet that mark the root of our common humanity, before we preoccupy with difference in faces, or who stands taller in life. This is not a day for name-badges.

A day instead of outward focus on universals of sun and water, sense of play, forward movement, curiosity (examining shells and seaweeds, tasting Salicornia). Other human qualities surface in tiny ways too (hinting at bigger back-stories): improvisation, adaptability, resourcefulness, solidarity in pulling each other through the muddy stretches, facing the unknown.

The warm west wind, moaning seals, a solitary egret. “Look up”, she says, and keep looking around (not at your silty feet) - take in the size of the sky. It feels like walking on the bottom of the ocean, she says – or on the top of the world.

As the distance grows and limbs tire, expressions become more resolute. The group has become a strung-out line of varying pace. Experiences individuating; conversations triangulating, comparisons and remembrances coming to the fore. “Like twenty-five years ago, in my village…”, he says, voice tailing off as he re-enacts stretching out full length to relax on the sand.

The horizon seems almost big enough to betray the curvature of the Earth. There is no constrained path; just a line of sporadic guide posts. No dividing of people or methods of approach into categories. “Freedom, yes, that’s the word”, she says.

This ancient route, now known as the Pilgrim’s Way, takes a direct straight line across the sands. A little to the north, a more angled line takes vehicle traffic on the causeway road. As the line of people and the line of cars diverge, eventually road sounds can no longer be heard by the walkers, and the distant procession of glinting bonnets and roofs threads its way noiselessly in parallel.

Between the two shores then, there are two cohorts on the move. On the road, modern-day questers on a pilgrimage to the gift shop - voluntary migrants, who may or may not know how their nation treats the involuntary ones splishing onwards just a mile away. Two worlds. Two tides each day. Two options – ignore or help.

As Asikainen has shown in previous work with these groups, the newly-arrived in our midst can sometimes find more ready routes to belonging through engagement with the natural world than through the social structures of urban life. Coinciding with a wider awakening of nature appreciation during pandemic lockdowns and a general growth in environmentally-focused arts practices, it is perhaps no surprise that the “Two Shores” project has attracted support from the likes of Natural England and the Northumberland Coast Area of Outstanding Natural Beauty.

Lindisfarne was one of the UK’s first sites to be designated for protection under the intergovernmental Ramsar Convention on Wetlands, in the1970s. More recently, the ways in which cultural factors are intertwined with science-based conservation have become formally acknowledged under the Convention, and there is general encouragement for management regimes that better integrate spiritual, historic and aesthetic significance with ecological significance. Increasingly too, it is arts-led projects by practitioners such as Asikainen that are finding the necessary ways of unifying segmented disciplines and transcending habitual ways of working. 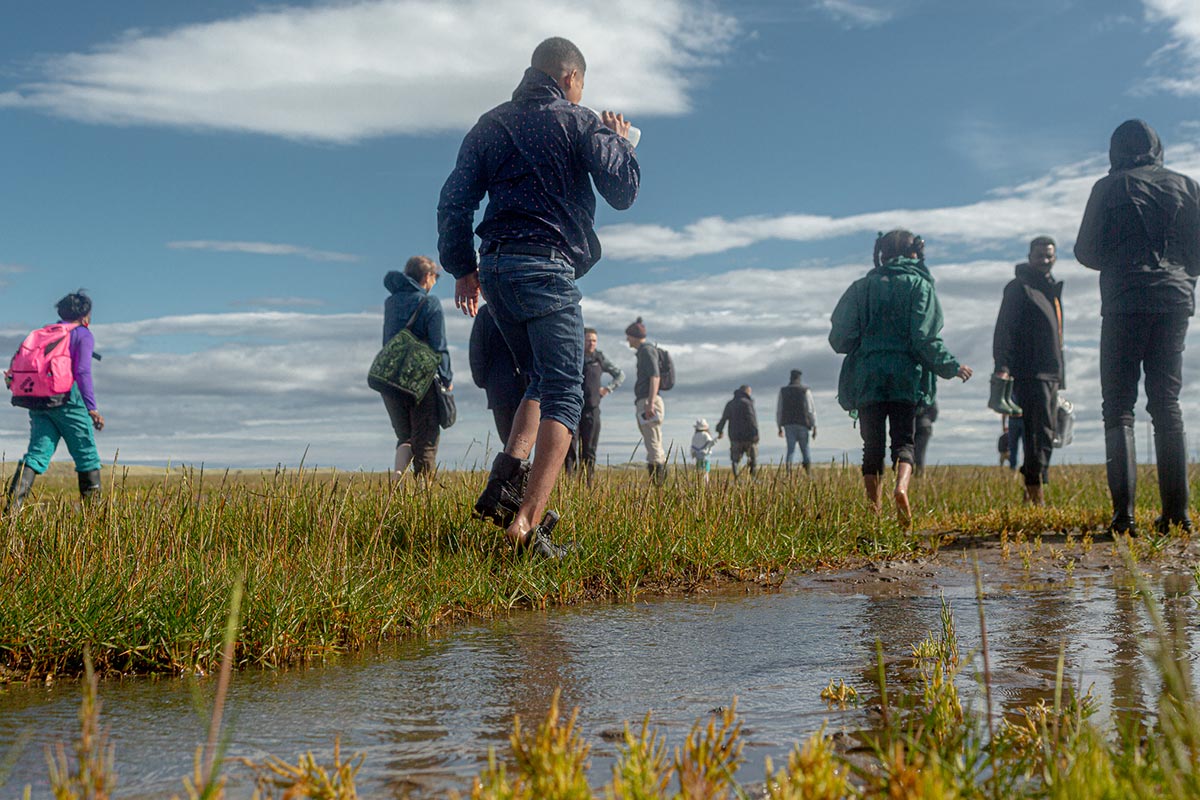 The splishing feet now glide through underwater lawns of Zostera eel-grass: always known to be crucial in supporting the Brent geese, but discovered recently also to be disproportionately effective at sequestering carbon. This place is a natural laboratory for our entwined futures.

And then one more entwining takes place: a fellowship between walkers and residents, as refuge is finally reached in the form of the hospitality of a welcoming lunch in the island’s vicarage garden. An old pew is part of the lawn-side seating, perhaps underlining the church’s role in civic space: facing outward, looking across the sea. (All this within sight, it must be said, of the paradoxical line of concrete beach defences constructed to resist invasion in the second World War; the terminology of which - “defence”, “invasion”, “retreat” – is now embedded in management of the coastline’s ecosystems).

A caring ethos has been here since St Aidan founded Lindisfarne Priory in the 7th Century, and when later incumbent St Cuthbert, on the way to becoming the patron saint of Northumbria, extended the field of concern by instituting protection for the island’s wildlife. Cuthbert’s remains now rest in Durham Cathedral, where the main door’s Sanctuary Knocker symbolises the principle of non-judgemental protective welcome at the heart of Between Two Shores.

Today is just the beginning of autumn – perhaps a little early, but we can anticipate the return of those geese, watch where they are able to settle their feet, and consider what we have learnt about ourselves.